I am Mary Lou Frost, born in Mercy Hospital in Buffalo, New York on March 7, 1933. My grandfather (on my father's side), Egbert Humphrey Stanfield, was born in Colden, New York on June 24, 1864. As a young man he moved to Canada to help build the Welland Canal. He was a structural engineer. He was married to Merinda Sherk in Fort Erie on January 14, 1885.

My grandparents, Egbert and Merinda Stanfield had moved to Buffalo and lived on Babcock Street by 1893. My father, Roy Stanfield was born in Port Colborne, Canada on November 30, 1891, but was a U.S. citizen through his father, Egbert Stanfield.

My father had four older sisters, three of whom settled in the Buffalo area and raised their families there. The "Stanfield Clan" were close and their children have maintained that family closeness for over a century. 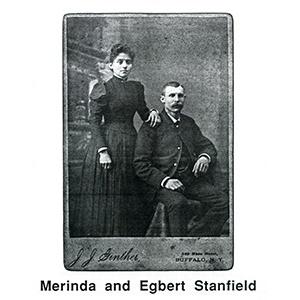