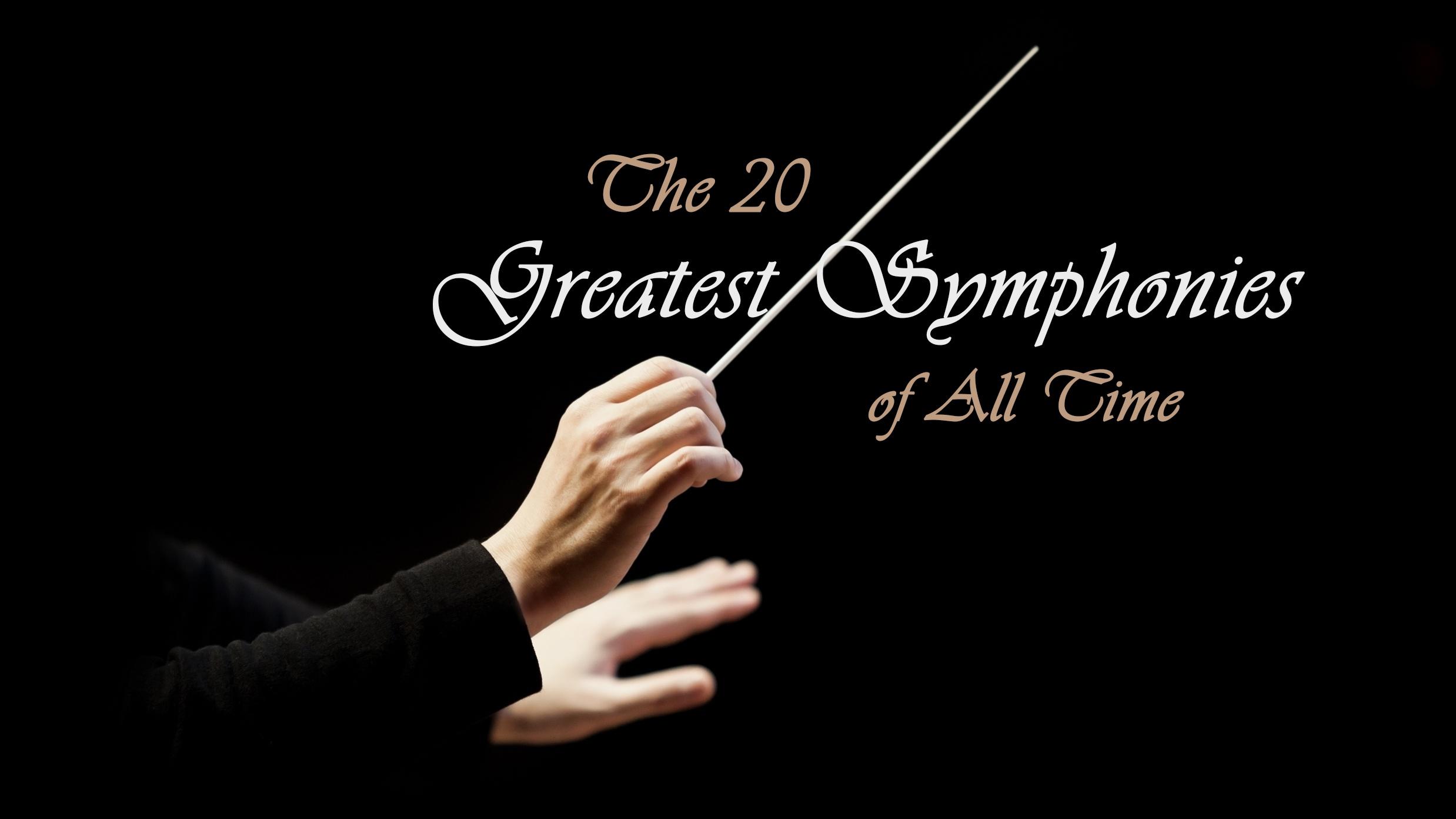 The 20 GREATEST SYMPHONIES of all time

No. 20. Bruckner: Symphony No. 7
Written in 1883, just after the death of Richard Wagner, this symphony, as a homage to that great composer of operas, has parts for four Wagner tubas. And oh… what a glorious sound they make.

No. 18. Brahms: Symphony No. 2
At a time of Romantic excess this symphony, written by a composer on vacation in the Alps, manages to balance the highs and lows perfectly so that it has claims to being the best constructed symphony written in the second half of the 19th century. Still, it’s so pleasant you hardly notice the craft behind its constant flow of melody.

No. 17. Shostakovich: Symphony No. 5
The ambiguities of the 20th century mark this symphony as a great conundrum. Is it an ironic send up of triumphalist rhetoric or is it a sensational paean of hope? Answer: it could be both.

No. 16. Beethoven: Symphony No. 7
This symphony, called by Wagner “the apotheosis of the dance,” constitutes a vast feedback loop between the physical sensations the music evokes in the listener’s body and the emotions that course as a consequence through the mind.

No. 15. Mozart: Symphony No. 40
Edgy and at least once positively atonal, this minor key symphony reveals its composer as at once the most human and the greatest dramaturge of the classical period.

No. 14. Sibelius: Symphony No. 7
The composer of this brief symphony wrote it with a bottle of whiskey always within reach. He knew, if the world did not, that it would be his last symphony. No composer has ever left a better testament.

No. 13. Bruckner: Symphony No. 8
A vast work with Sierra-like gleaming snow-capped peaks and soft, forested valleys, this symphony pays homage to both Bach and Beethoven over the course of its high peak hike.

No. 12. Brahms: Symphony No. 3
No question about it, this symphony contains all kinds of personal messages. Over its four movements it tells the tale of an unconsummated love affair that begins with a musical clue to its content: just 4 notes: F, A, A-flat, F. Those notes stand for “Frei aber Froh,” German for “Free but Happy”.

No. 11. Beethoven Symphony No. 5
Perhaps the most famous, if not the greatest, symphony of all time. It is the first symphony that takes aim with its first notes at its very last notes, pushing the listener ever forward, sometimes relentlessly and sometimes gently on to the mighty C major ending.

No. 10. Mahler: Symphony No. 3
A gigantic symphony that began with a simple question that led to a very long answer. “What do the rocks tell me?” That’s the same question that geographer, explorer Alexander Humboldt asked a few generations before the composer got around to it. Both geographer and composer came up with profound if very different answers.

No. 9. Tchaikovsky: Symphony No. 6, Pathetique
This is a symphony that has always been associated with tragedy because the composer’s death soon followed the premier. Some have even interpreted this symphony as the world’s longest suicide note.

No. 8. Brahms: Symphony No. 1
“You don’t know what it’s like for the likes of us when we hear footsteps behind us.” Those were the words of the composer of this symphony when he was asked why it took him so long to write it. And exactly whose footsteps was he hearing?

No. 7. Berlioz: Symphonie fantastique
This is the symphony that forever linked the autobiography of the composer to the music he might write. Like his life, his symphony is a mixture of reverie and wildness.

No. 6. Brahms: Symphony No. 4
This symphony is a last symphony that is a true summing up musically. It is a work by a man obsessed with music’s past and its great creators… Bach, Mozart and Beethoven. Yet it maps out a future for the symphony as well.

No. 5. Mahler: Symphony No. 2, Resurrection
Hearing this long symphony, the critics called it a “monster” and its composer “impious”. But audiences were transported by it; they hardly noticed its touches of Nietzsche and Freud.

No. 4. Mahler: Symphony No. 9
This is another “last” symphony even though the composer didn’t know it. It is also the largest “last” symphony of them all with a percussion section that includes timpani, bass drum, triangle, cymbals, tam-tam, glockenspiel and three deep bells.

No. 3. Mozart: Symphony No. 41, Jupiter
Yet another “last” symphony in which the composer seems to revel in creating conflicts that only he can unravel. It’s a symphony written deeper than most, a demonstration that harmony not melody is at the heart of what stirs us in music.

No. 2. Beethoven: Symphony No. 9, Choral
What do you do when music alone won’t do what you want it to? You write this symphony, but only one deaf composer could do it.

No. 1. Beethoven: Symphony No. 3, Eroica
This symphony changed everything about music. Before it, music served as hand maiden to other purposes and activities. Symphonies were stimulating diversions, pleasing and, often, moving entertainments. This symphony, however had the power to change the people who heard it, to grab them, lift them, completely engage them and finally without reference to class or religion inspire them.