Buffalo Toronto Public Media is partnering with the Buffalo & Erie County Library and The Buffalo History Museum for a community engagement initiative around Benjamin Franklin. BENJAMIN FRANKLIN is a new two-part documentary directed by filmmaker Ken Burns that aired on WNED PBS. This community engagement initiative will encourage people to look more deeply into Franklin– his writings, experiments and life, in an effort to promote dialogue about the values of diversity, equity, and inclusion.

BTPM is holding an Artist & Activist Showcase open to our community!

We are calling for community submissions in relation to the art and writing of Benjamin Franklin. Community members are encouraged to create and submit political cartoons, art pieces, short writings, and poetry related to the theme: "Today's Equity Challenges vs. 18th Century Thinking." BTPM will collect and organize submissions that will be shared on our website and social media platforms.

“If you would not be forgotten, as soon as you are dead and rotten, either write things worth reading, or do things worth the writing.” – Benjamin Franklin

Create, or Miss Out!

Need some inspiration? Although Franklin was best-known for his contributions to the documents that helped create the United States of America and his prominent role in the American Enlightenment, he also penned an impressive essay about flatulence, wrote poetry about lying, provided practical tips for households, created puzzles, and drew political cartoons to inspire revolution. Use your own life and our times to inspire you. Write a poem about the mayoral race or the Bills 2022 AFC championship game. Draw a cartoon about the Skyway or the Buffalo economic renaissance.

Your content may be selected to be featured  on the project website at  wned.org,  on social media and at the community screening and discussion event on April 1, 202. WNED PBS will reject content that contains inappropriate language, threats, attacks, name-calling, promotional material, or is off topic. Users may only submit content that they own. Content should be free of commercial branding or logos.  The submission of content does not guarantee that it will be featured in the documentary or the scrapbook on our website. The decision of whether to include content will be made solely by WNED PBS.

What are the types of work I should submit?
Political cartoons, art pieces, short writings, and poetry related to the theme: "Today's Equity Challenges vs. 18th Century Thinking."  Use the online submission form to upload photos, drawings, and writings! We are accepting up to three submissions per person.

Which types of media can I submit?
Documents, PDFs, photos, or images. The maximum file size accepted is 100MB.
Please only submit materials that you created.

What happens after my content is submitted? When will it be visible on the site?
Buffalo Toronto Public Media will review all submissions prior to appearing on the website or social media. You will receive an email to notify you if your work is selected for use in the community discussion and screening event. Content deemed inappropriate will be rejected.

Why would the work I submit be rejected?
Buffalo Toronto Public Media will not post content that contains inappropriate language or content, threats, attacks, name-calling, promotional material, or off-topic material. Your submission will also be rejected if you submit materials whose rights are owned by others, such as a book excerpt or a copyrighted song or photo.

Visit the Buffalo and Erie County Public Library to learn more about Franklin through books, movies, CDs and free downloads. Download this curated reading list of new and notable works on Benjamin Franklin.

Franklin, whose life has been celebrated as a quintessential American story, was anything but typical. His 84 years spanned nearly the entirety of the 18th century, an epoch of revolutionary change in science, technology, literature, politics and government—change that Franklin himself helped to advance. He launched the first public library in America, organized a volunteer fire company, and founded an academy that eventually became the University of Pennsylvania. His annual publication, “Poor Richard’s Almanack,” set a model for future humorists such as Mark Twain and contained maxims that are still part of our shared lexicon. And his famous experiments with electricity led to one of his most important inventions—the lightning rod.

While Franklin was committed to the ideals of the Enlightenment—always looking to improve himself, his community, and humanity at large—he was also full of contradictions. He could be whimsical yet philosophical, folksy yet unforgiving, generous yet shrewdly calculating, and broadminded yet deeply prejudiced. Critically, especially for a man so associated with independence and individual liberty, Franklin enslaved people and did not become an abolitionist until very late in life. The Franklin household had at least six enslaved individuals, including Peter, Jemima, Othello, George, John, and King.  Franklin’s newspaper, The Pennsylvania Gazette, also advertised the sale of enslaved people and published notices of runaways. And while he publicly denounced white settlers who indiscriminately killed Indigenous people, he also championed the expansion of white settlements on to Indigenous lands.

“Benjamin Franklin was a fascinating and complicated individual who helped shape our contemporary world,” said Ken Burns. “If we see him for more than his long list of accomplishments, we recognize an imperfect man challenging himself and his contemporaries as he tries to understand and improve the world around him. One of the best and most prolific writers of the 18th century, Franklin both embodies and documents the dynamic social, scientific and political changes of this revolutionary age. His story is one of hope, with a faith in the common man. But his shortcomings are also a reminder of this country’s failure to address slavery at the time of its founding and the racial divisions that continue to impact our country today.” 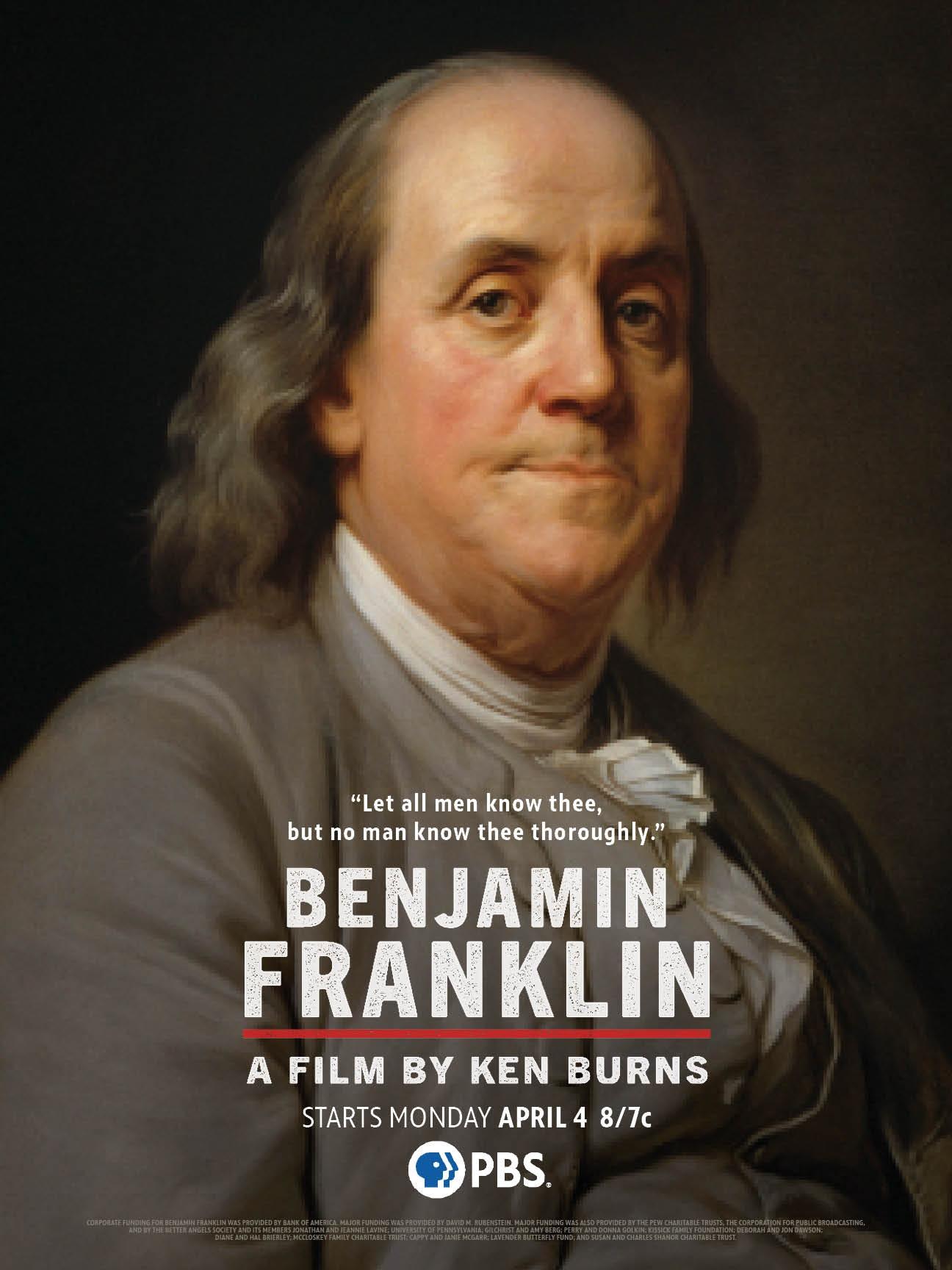