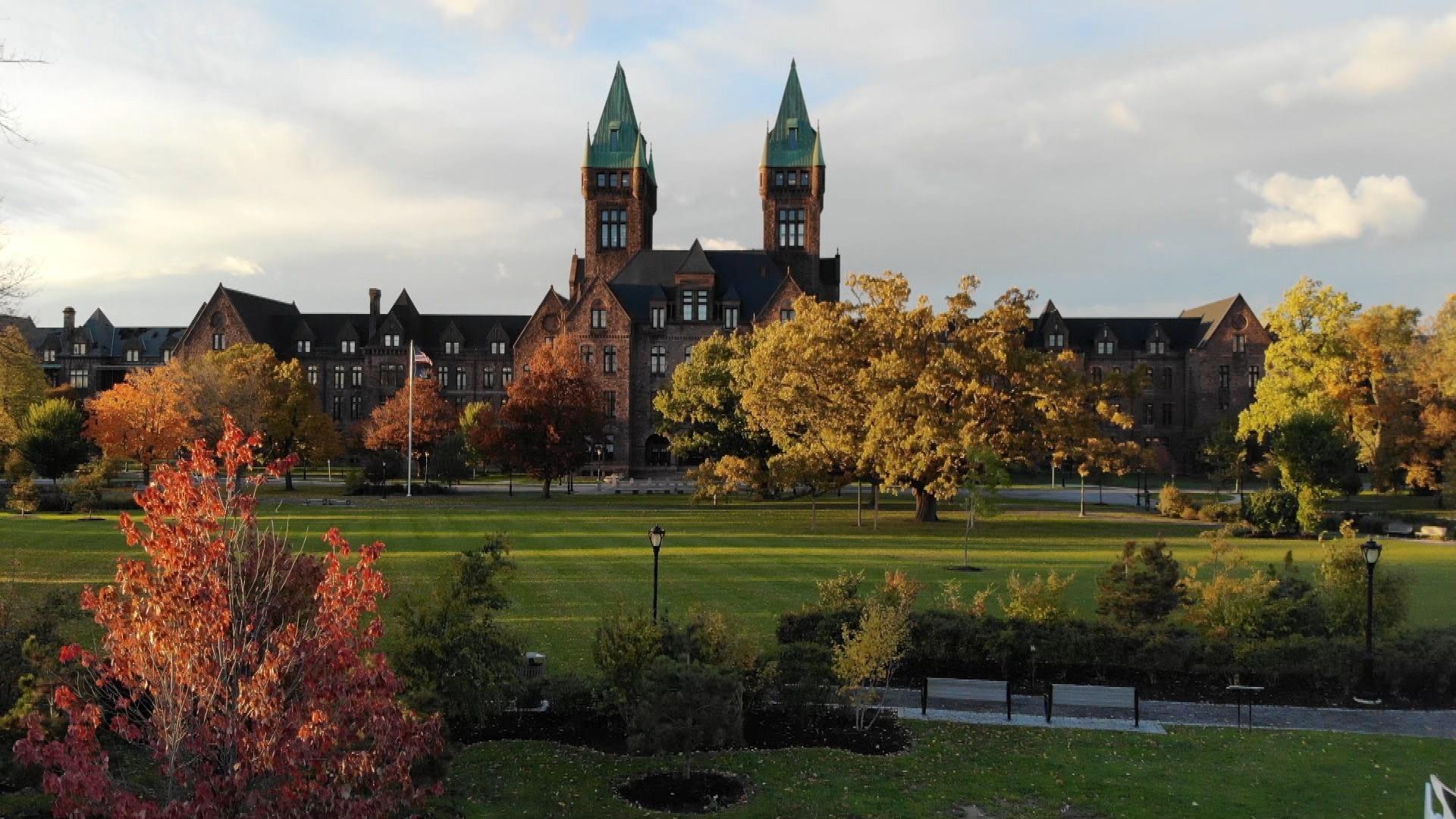 Widely considered to be one of Buffalo’s most beautiful and architecturally significant buildings, construction on the Richardson Olmsted Campus began in 1872 and it opened in 1880 as the state-of-the-art Buffalo State Asylum for the Insane. Over the years, as mental health treatment changed, so did the buildings and grounds. This essay on the history of mental health treatment in New York offers a closer look at the care for people with mental illness and insights into how that influenced the evolution of the Richardson Olmsted Campus.

A Brief History of Mental Health Care in New York

One must tread with care when looking back in time and not judge the actions and opinions of others by the standards of today. There is no better advice for the scholar of nineteenth century asylums. Certainly there were times when the treatment was barbaric for those judged to be insane. Patients were isolated, shackled, poorly clothed and fed, as well as subject to such treatments as bloodletting. One could argue that fear and ignorance drove decision making when it came to mental health care. However, during the nineteenth century, significant progress was made in the understanding and treatment of mental illness. In New York, the efforts of both physicians and reformers lead to a series of laws that would usher in a more widespread focus on Moral Management, which began to emerge in the previous century. Moral Management of the insane argued for fresh air and exercise, a regimented work schedule, and kindness. As this system was implemented, the nineteenth century saw a continued, if slow, improvement in the care of the insane.

Early understanding of insanity attributed the affliction to a variety of non-physical phenomena including demonic possession and supernatural curses. During the mid-nineteenth century, there were a number of dedicated physicians who devoted their professional lives to understanding the nature of mental illness and improving mental health care. The evidence lies in the medical literature, where physicians discussed the difference between the brain and the mind and whether a diagnosis of insanity could be treated in the manner of other physical ailments. Some physicians focused on the mental indications of the disease. In 1855, Dr. Sanford B. Hunt discussed the feeble will as the predisposing cause of hysteria and argued that in different forms of the condition, the mind became possessed of a dominant thought that it couldn't overcome.

Later in the century, physicians in New York became interested in trying to identify the early indications of insanity. It was thought that if treatment occurred within the first three months after the onset of symptoms, a cure was likely. Dr. George P. Gray, the Superintendent of the New York State Lunatic Asylum at Utica, recommended the appointment of a pathologist to undertake the study of a variety of indicators including sphymography (recording of the pulse), changes in the color and elasticity of the skin, and changes in the nerves and vessels of the eye in an attempt to identify lesions associated with insanity.

Toward the turn of the century, insanity was understood as a disease of the brain. An unhealthy brain resulted in an unhealthy mind. Dr. J.B. Andrews of the Buffalo State Asylum defined insanity as a prolonged departure in the individual from his normal mode of thinking, feeling or acting, the result of brain pathology. Such a departure could come on rapidly due to an injury, illness or the abuse of substances such as alcohol or laudanum. Dr. Andrews also acknowledged general life stress as a potential cause of insanity. He further suggested that most physicians underestimated life stress in the development of mental illness to the detriment of the patient.

Care of the Insane in New York

The New York Hospital, which opened in 1791 as a general hospital in New York City, was the first facility to provide care for the insane. However, during the early decades of the nineteenth century, almshouses were the primary refuge for the indigent chronic insane.

Many poorhouses did not have separate buildings to house insane patients and they often lived among the general population of inmates, which included widows, orphans, the indigent and the infirm. Problematic patients, those prone to violence or melancholy were shackled and isolated from others. In 1843, the New York State Lunatic Asylum at Utica was established as an acute care facility, which accepted the transfer of patients thought to be curable from county poorhouses. Many of those same patients were transferred back to the poorhouse in their home county when it was determined that they could not be cured.

By the mid nineteenth century, county poorhouses were overcrowded with long term residents determined to be insane. Living conditions were deplorable in many institutions across the state. Dr. Sylvester Willard, then secretary of the State Medical Society and the Surgeon General for New York, described filthy living conditions, including patients living like animals, shackled with only straw for bedding, and inadequate clothing to protect them from the cold.

The Willard Asylum Act was passed in 1865 requiring the removal of all patients with a diagnosis of insanity from poorhouses across the state. Those deemed curable would be sent to the Utica State Asylum and those considered incurable to the new Willard Asylum for the Chronic Insane in Ovid. However, counties could seek an exemption if the State Board of Charities could be convinced that they were able to provide adequate care in the poorhouse.

The 1870’s saw the construction of other insane asylums as overcrowding in the existing institutions continued to be a problem. The Hudson River State Asylum in Poughkeepsie opened in 1871 as an acute care facility. The State Homeopathic Asylum at Middletown opened in 1874 and was the first of its kind in the country. While construction of the Buffalo State Asylum began in 1871, the institution didn’t open until nearly a decade later.

In mid-nineteenth century, the discussion on the advantages of Moral Management continued among physicians and reformers like Dorthea Dix, who traveled the country as an advocate for the humane treatment of the insane. In 1854, Dr. Thomas S. Kirkbride, Superintendent of the Pennsylvania Hospital for the Insane published Report on the Construction of Hospitals for the Insane. The Kirkbride Plan, also known as the Linear Plan, described in detail the ideal hospital for the insane, including the site, location, landscaping, architectural design, ventilation, heating and lighting systems. A classic example can be found in the Buffalo State Asylum.

Kirkbride’s plan incorporated the design of the asylum into the patient treatment plans. He maintained that the ideal asylum would be located in the country, away from the stress, noise, and noxious miasma of the city. The property should be sufficient to allow for exercise, leisure activities, and outdoor work, all of which were critical aspects of mental health treatment. The asylum’s design consisted of a central administrative building with staggered wings on either side, for the separation of male and female patients. Each wing would house a different class of patient, with the most difficult cases furthest away from the center.

In its early decades, The Buffalo State Asylum was an acute care facility. Patients were encouraged, but not forced to assist in the upkeep of the farm or in other domestic chores such as the kitchen or laundry. They were also encouraged to exercise and socialize on the meticulously landscaped grounds. Although the institution was designed to house 600 patients, overcrowding soon became a problem. By the turn of the century, the facility averaged over 1,800 patients.

After the turn of the nineteenth century, The Buffalo State Asylum underwent a name change to the Buffalo State Hospital, reflecting the evolution in patient care. The institution, which had adhered so rigorously to the Kirkbride Plan incorporated changes to reflect a movement toward the Cottage Plan. This plan focused on separating specialized populations into separate buildings or cottages with a more domestic feel, unlike the Kirkbride model, which houses all patients under one roof, albeit in separate wards.

The Cottage plan was a reasonable solution to address the overcrowding that had been a problem since the 1890s. It also had the advantage of more efficiently separating specialized populations. Acute, convalescing, and chronic patients all had different needs. As treatments directed at specific types of mental illness emerged, the Cottage Plan also offered a more efficient setting for implementation.

Similarly, patients with infectious diseases, like tuberculosis, required separation. Tuberculosis was a major health threat in most American cities at the turn of the century and posed significant problems in public institutions. Another infectious disease which was a problem at the Buffalo State Asylum well into the twentieth century neurosyphilis. Malaria therapy was used to treat patients with neurosyphilis during the 1920s. Patients with tertiary syphilis were infected with Malaria, which would cure the syphilis, and then treated for Malaria. This treatment was used until the advent of penicillin in the 1940s.

Insulin shock therapy, a precursor to electro-convulsive therapy emerged for the treatment of schizophrenia (known then as dementia praecox). As early as the 1930s surgical solutions for schizophrenia were utilized. Although there were some lobotomies performed at the Buffalo State Hospital, neurosurgery was not commonly used there.

The mid twentieth century saw the advent of pharmaceutical treatments used for a number of mental illnesses, including schizophrenia, mania and other psychoses. Chlorpromazine (thorazine) was among the medicines most commonly used at the Buffalo State Hospital.

By 1965, the new 520-bed Nicholas J. Strozzi building was opened and over the next nine years, patients were gradually transferred from the old asylum buildings to the new facility. The Buffalo State Hospital underwent another name change to the Buffalo Psychiatric Center, again reflecting the continued evolution of mental health care. Throughout the ninety-four years of its existence, the institution underwent significant changes as innovations in mental health care emerged in its efforts to provide care for the patients it served. It is important to remember this evolution and the many people who were instrumental in its process to place the history of mental health care in true historical context.

A Brief History of Treatment with Rosanne Higgins, Ph.D.

Gain a better understanding about the history of treatment for people with mental illness. 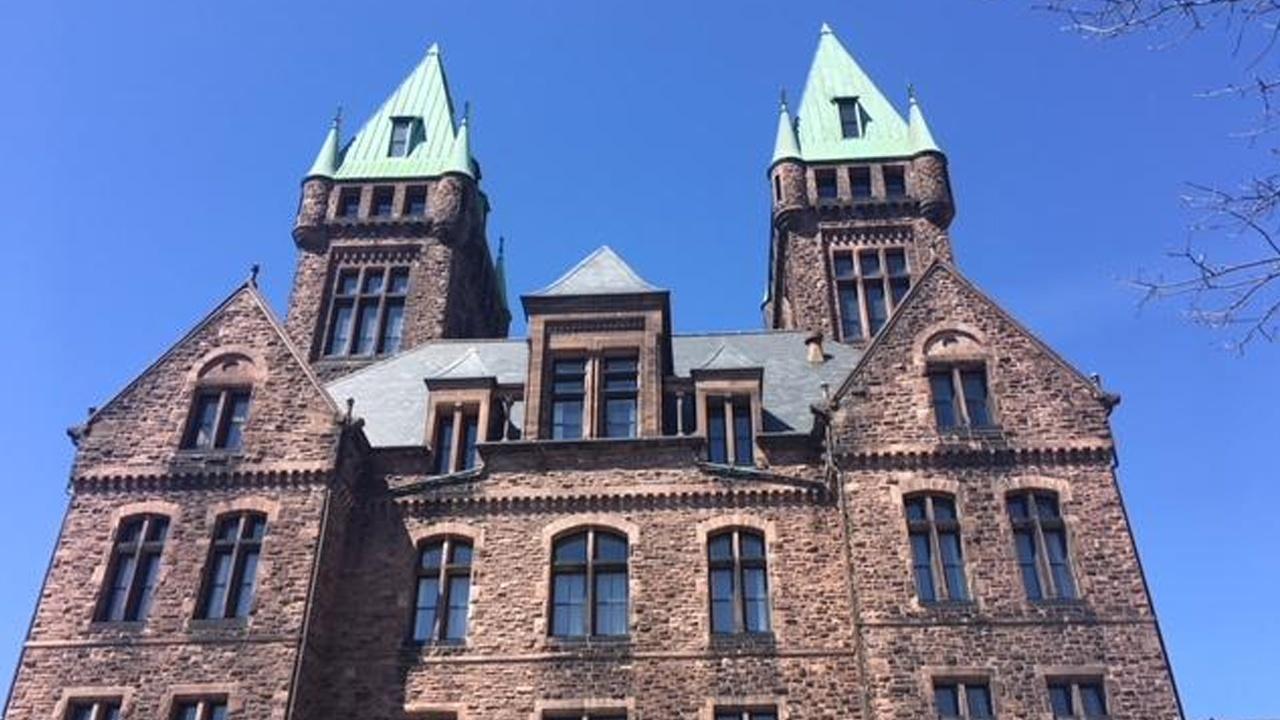 As part of our Mental Health Reporting Initiative, WBFO explores the origins of the massive Richardson Olmsted Complex, built as a place of healing for the mentally ill. 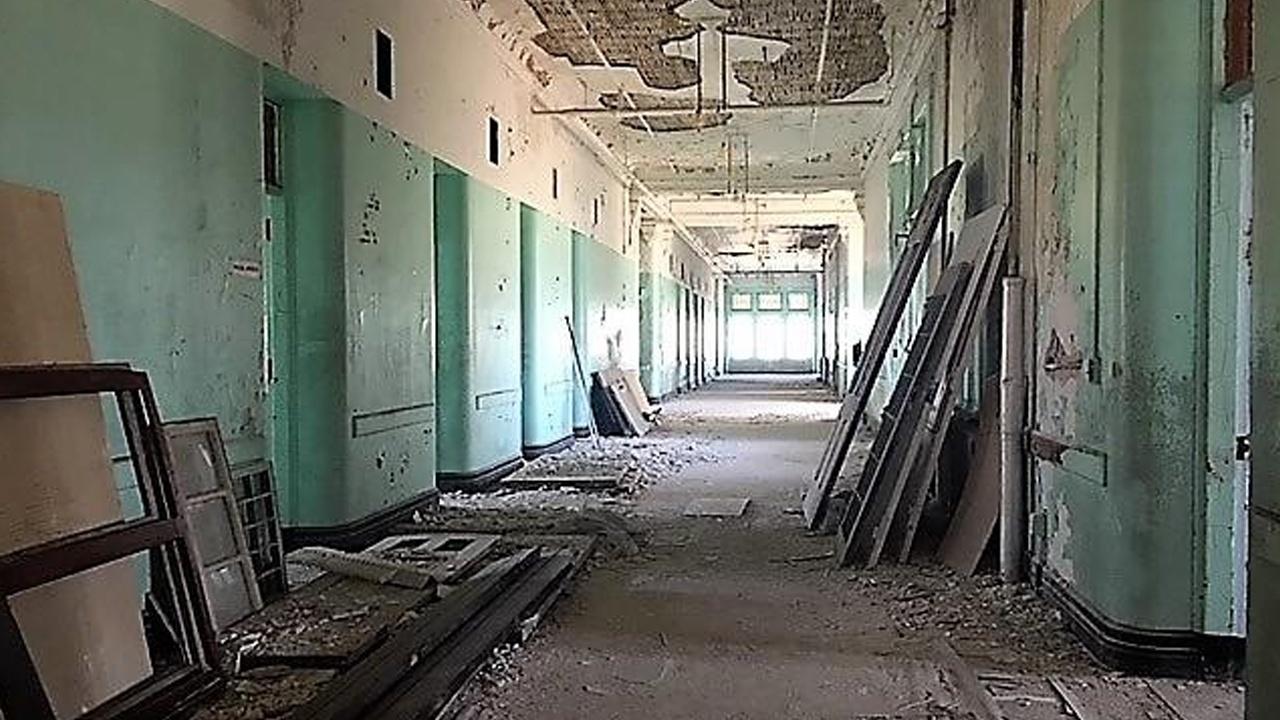 The very first psychiatric center in Buffalo was called Buffalo State Asylum for the Insane. The name changed over the years and so did the way patients were handled. 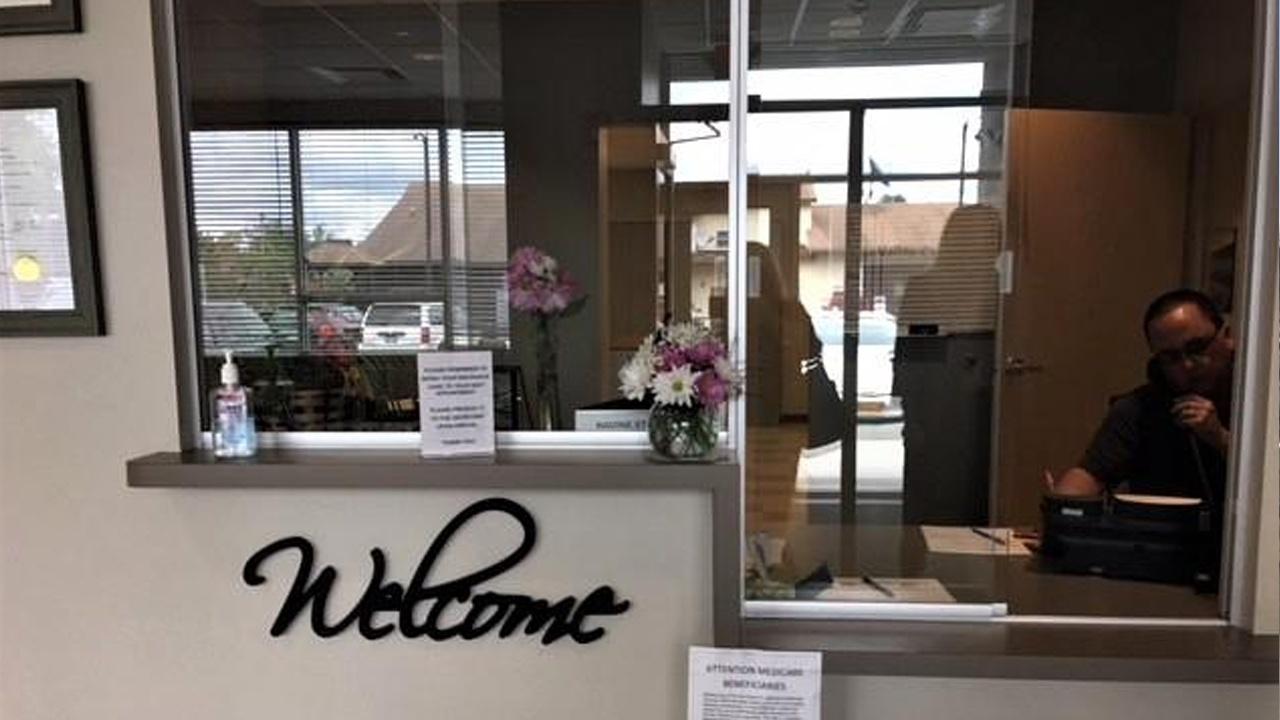 Mental illness treatments have improved dramatically over the years, but past methods left scares and a stigma for those seeking help.